Many people in South Florida are avid Golfers. There are country clubs and golf courses as far as you can hit a ball. But many people aren’t conscious of how at-risk they are when golfing. To understand how golfing injuries happen, we need to define the mechanics of proper play and how it can affect the areas in use.

The Mechanics of Golfing

Golfing composes of two predominant motions, walking or riding, and swinging or putting. Most professionals recommend slightly bending your knees before raising the club roughly 145 degrees of arms reach before hammering it down and following through, easing your ankles and knees through the process.

Effective power hits are done by doing this in a fluidic motion. But, the three primary areas are all at risk if improperly handled. 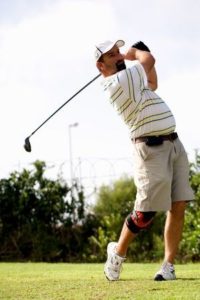 The Hips and Groin – The next area that often happens is injuries with the sacroiliac joints and the outer hips. With the newer guys, they will often focus on the speed as opposed to maintaining the technique and stance. When this happens, there is unneeded stress placed on the hips and groin which can often result in injury.

The Ankle and Knee – Finally and following up on the hips and groin are the ankle and knees which can follow in the same problem. The largest at-risk factor would be the knee which can easily catch torsion.

GenLife offers some of the best medical advice and treatments to help with golf injuries. We have helped countless professional athletes and aficionados alike. If you would like to learn more about our company or our services, give us a call today at 844-859-7788